Tradition and consistency in the paper converting industry 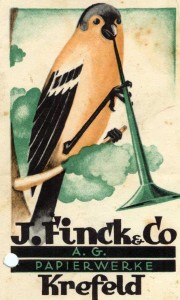 It was on May 1st, 1853 that Jacob Finck decided to change the direction of his company, which, up until that time, had been known as Papier- und Garngroßhandlung Coenen & Finck (paper and yarn wholesale company); the new company, running under the new name of J. Finck & Co., would focus primarily upon the paper wholesale trade. At that time, the company sold a variety of packing paper. Important products were the range of greaseproof paper, such as parchment or glassine, which was used by butchers and in grocery stores.

The textile industry in Krefeld, which boasted a whole host of looms and weavers, proved to be the source of many important customers. J. Finck & Co delivered texile, modeling and punched cards, wrapping tissue, and corrugated cardboard to name but a few. However, towards the second half of the 19th century, the golden years of Krefeld’s silk weavers were soon to reach an end. It was during this time that the families Finck and te Neues agreed that Paul te Neues should be taken on as a new apprentice at J. Finck & Co.

In the years to follow, the company prospered. Paul te Neues enlarged the catchment area and was able to win new customers in the Lower Rhine area. He especially focussed on serving the large mechanical cloth weavers based in the towns of Süchteln, Gladbach, Viersen, and Dülken.

In 1930, the eldest son of Dr. Heinz te Neues managed to acquire Hermann Lange as an investor, and founded the independent company Dr. te Neues & Co Druckereigesellschaft (printing company), which worked with J. Finck & Co under one roof. 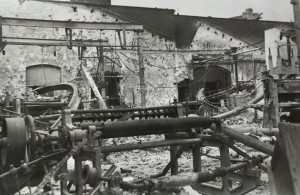 Following the seizure of power by the National Socialists, the company became active in the paper market. Finck was assigned the task of cutting, winding and delivering greaseproof paper. During a major attack on Krefeld in 1943, the premises Dießemer Straße 166 were completely destroyed and reconstruction measures were to be commenced in the following years.

The year 1946 saw the youngest son, Ulrich te Neues, return from the war and join the company as a partner. The company had just signed a leasing agreement with the Krefelder Stückfärberei (Krefeld Dye Works) situated on Blumentalstraße, and it was here that economic activity was set to start again.

In 1953, the company celebrated its 100th anniversary and the first property on Grünen Dyk, where J. Finck & Co. can be found today, was purchased.

In 1966, Armin te Neues joined the company and introduced a new accounting system. Unfortunately, through using this system it became apparent that there were no synergies between Finck and the printing company. A spin-off of the printing department and independence under the name Novapack did not have the desired effect; therefore, this area of business unfortunately had to be closed down in 1973. The result of this saw the company concentrate more on the processing business which now experienced an upswing into the late 90s. The company became the main supplier for the steel and iron industry with interleaving paper and packaging papers for steel coils, including paraffin papers, bitumen papers, crêpe papers and the like.

If you would like to learn more about our history, you can download the PDF version of an article (in German) written by Armin te Neues from “die Heimat”, issue 78/2007 from the Association for Local History e.V. Krefeld.

We use cookies to ensure that we give you the best experience on our website. If you continue to use this site we will assume that you are happy with it.Ok